HARRISBURG (April 4, 2017) — The Pennsylvania Bar Association (PBA) Commission on Women in the Profession will present its annual Anne X. Alpern Award to Deborah Epstein Henry, a recognized expert, consultant and public speaker on women, careers and the legal profession.

An awards ceremony honoring Henry will be held during the commission’s 24th annual conference, “Lessons Learned from the Women’s Movement,” May 11, at the Omni William Penn Hotel, Pittsburgh.

The Alpern Award is presented annually to a female lawyer or judge who demonstrates excellence in the legal profession and who makes a significant professional impact on women in the law. Established in 1994, the award was named for Anne X. Alpern, Pennsylvania’s attorney general in 1959 and the first woman state attorney general in the nation.

Since the late 1990s, Henry has traveled the world and spoken to thousands of women, lawyers and other professionals to help improve the trajectory of their careers and make their workplaces more hospitable for everyone.  Her international work includes multiple engagements in The Hague, as well as in Paris at the French Senate and in London, Vienna and other cities abroad. She began her legal advocacy roots in Philadelphia, where she developed a women lawyer’s network to provide support and resources. Henry’s work has been featured in a wide range of news outlets, including The New York Times, NBC Nightly News, The Wall Street Journal, National Public Radio, The American Lawyer and many more.

After practicing as a litigator at Schnader Harrison Segal & Lewis LLP, in 1999, Henry founded Flex-Time Lawyers LLC to provide consulting, training and speaking services. In 2006, she conceived of the Best Law Firms for Women initiative, a national survey she subsequently developed with Working Mother to annually select the top 50 law firms for women and report on industry trends. Henry ran the Best Law Firms for Women initiative with Working Mother for a decade. By 2008, her public speaking, press exposure and advocacy enabled her to build a network that she began with six lawyers in Philadelphia to a national network of over 10,000 lawyers. From there, she and two colleagues co-founded a second company, Bliss Lawyers, that employs lawyers to work on “secondments,” or temporary engagements for in-house legal department and law firm clients. Bliss has expanded to also handle temporary to permanent and direct hire placements, and the company has lawyers employed for clients from New York to California.

An active member of the legal community, Henry regularly donates her time to women lawyers in Pennsylvania and beyond via speaking engagements with bar associations and other nonprofits. She is a liaison to the American Bar Association Commission on Women and a member of the New York City Bar Committee to Enhance Diversity in the Profession. Outside of the profession, Henry is a member of the Forum of Executive Women where she co-chairs the annual Leadership Symposium and serves on its Membership Committee. She is also a senior advisor to the Center for Talent Innovation. Her efforts have been recognized with the Women of Distinction and 40 Under 40 awards from the Philadelphia Business Journal.

The award will be presented during the May 11 luncheon, which also will include a keynote presentation by Lilly Ledbetter, a nationally-recognized employment discrimination plaintiff and co-author of Grace and Grit: My Fight for Equal Pay and Fairness at Goodyear and Beyond. Details and registration information for the PBA Commission on Women in the Profession conference are posted on the PBA’s website at http://www.pabar.org/pdf/2017AnnualMeetingBrochure.pdf. 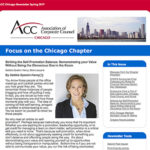 Striking the Self-Promotion Balance: Demonstrating your Value Without Being the Obnoxious One in the Room 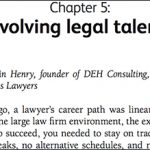 The Case for Law School Sororities

Executive, board representation for women slowly increasing in Greater Philadelphia as companies up diversity transparency

Viewpoint: For leaders, the power of sharing creates a means to convey trust and compassion

Viewpoint: 10 tips for pursuing your post-pandemic life with ambition, and a dose of reality

Philadelphia Businesses Must Do More to Increase Representation of Women

Empathy and Innovation: Highlights from ‘Future of Legal Services’ Panel

What Makes A Virtual Lawyer Happy?

Effective Networking and Increased Connection in a Remote and Hybrid Workplace

An Enlightening Webinar Will Show a Way toward Needed Change